Another edition of the city cycling campaign motivating citizens of Gdansk to switch to bikes!

Bike to work and school

To encourage the inhabitants of Gdansk to take care of their own health and condition and to choose a bicycle for everyday transport.

people in the app

For years now Gdansk has been described as one of the best cities to live in Poland and even in Europe. Strong support from the city for bicycle transport surely has its considerable share in this title. After all not since today we know that a regularly cycling society is at the same time healthier, happier and has more time for itself and its family. In Gdansk, Municipal Office employees not only builds more bicycle routes (of which there are already 736 km in the city), but they act at the very source: if the goal is for more residents to switch from cars to bicycles, they should be encouraged to do so first!

For several years now, such motivation has been provided by a two-month city game "Bike to work and school – cover kilometres for Gdansk". Points for recorded routes, individual and team rankings, a store in the app with an internal currency Active Coins and attractive prizes for more than 1000 best participants - thanks to this, every year more and more people join the informal Gdansk cycling community, reaching almost 5000 active participants in 2020!

Starting from September 14th, participants saved their bicycle routes in the Activy app or sports watches integrated with it. Each ride gave them 5 points, and additionally they received 1 point for every kilometre they covered. Employers interested in taking part in the game applied by giving the address of their office, and after verification by the Municipal Office in Gdansk, the company was added to the competition. If the participants joined the team of their company, school or university, the app itself detected a ride started or finished in its vicinity and awarded not 5, but as many as 50 points!

In the second half of the competition a big opponent of the cyclists is the weather, strong wind, low temperatures and rainfall. Therefore, to reward the commitment of the game’s participants, the points were doubled, and each trip on the bike paid off twice :)

According to scored points all participants gain a corresponding position in the ranking. In the app participants can compare themselves individually, in the overall ranking and by gender. But group rankings are of greatest interest: schools, universities, groups, districts and companies. This year companies were additionally divided according to the number of employees, which made the competition even fairer. In 2020 the kilometres for Gdansk were covered by companies such as LOTOS, LPP, Nordea, Ikea, PGE or Lufthansa. Members of a one team e.g. company's team, often motivate each other to beat the other groups together.

Living in Gdansk, it is impossible to miss this challenge: posters and banners with an invitation to participate in the action can be found at the back of buses and stops, while more detailed information can be read on the challenge's website and many local news portals, such as trojmiasto.pl, gdansk.pl or Radio RMF MAXXX. Many people also find out about the contest directly from their employers, schools or universities, which encourage everyone to join the game, to care for their well-being and build healthy habits.

Some of the participants are waiting for the Gdansk Cycling Challenge all year round and already a few weeks before the start, they bring to life a Facebook group dedicated to the competition. Everyone there can boast about their cycling achievement, advise on technical matters or arrange a weekend cycling trip together.

Participation in the challenge is, of course, completely free of charge for individuals as well as companies, high schools and universities. The whole contest and part of the prizes are financed by the President of City of Gdansk. The challenge is also supported by local businesses - Gdansk bicycle stores: Szprychy.com, Wysepka, Giant Wrzeszcz or Centrum Rowerowe Buga Sport have been funding the prizes for the most engaged participants for years now. 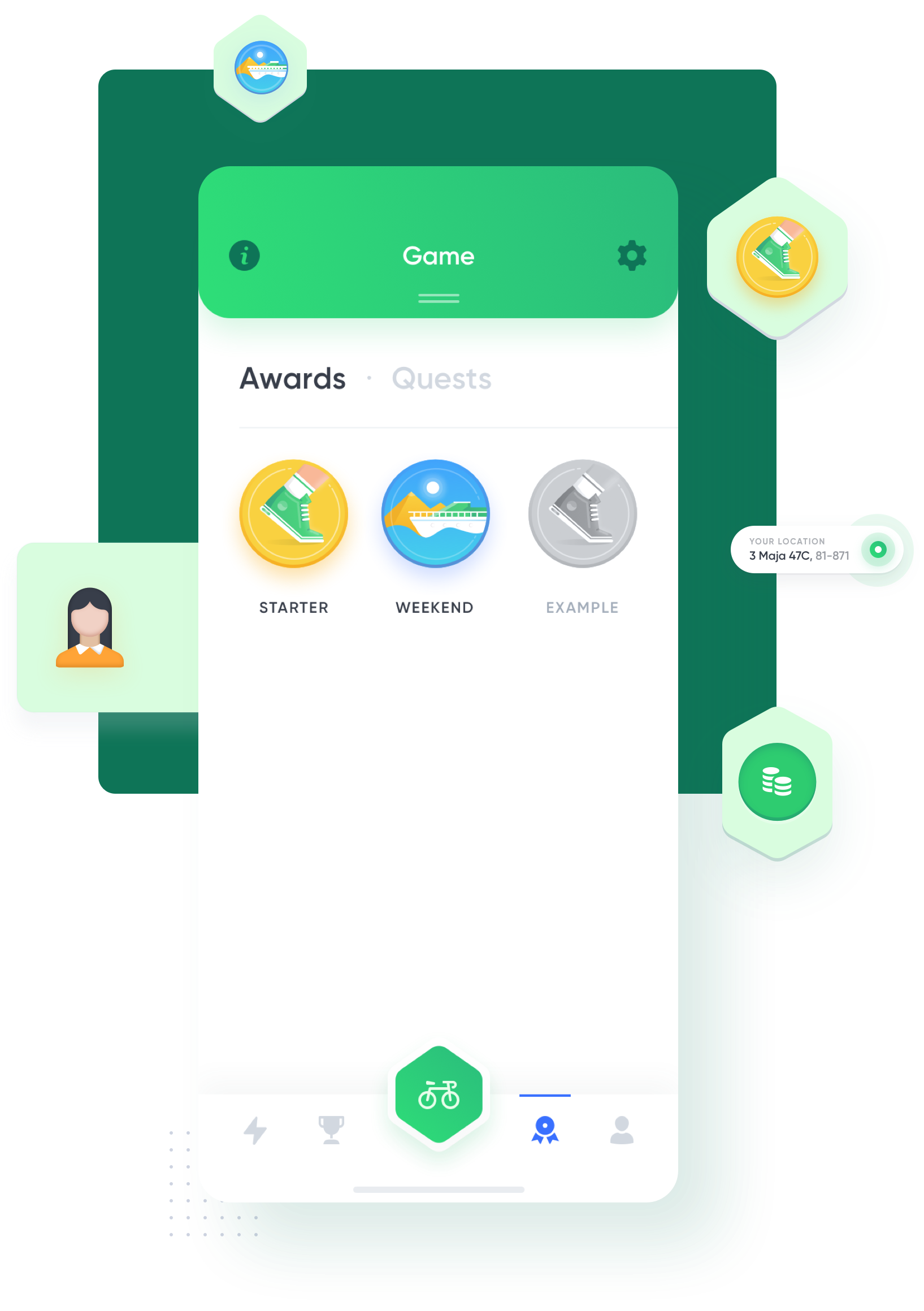 This bicycle challenge triggers a lot of joy in the participants, people really get involved, often with whole families. Some find their passion for cycling, others gain self-confidence thanks to the loss of excess weight. A very big motivation turns out to be prizes in the app’s store, where you pay for purchases in Active Coins - your account balance is equal to the sum of points earned in the game. Apart from gadgets from local bicycle stores, every year the City of Gdansk funds sweatshirts and smaller gifts (this year socks) with the campaign logo. The magic 7 777 points for a sweatshirt has already become a legend, everyone’s goal is to earn one, but only the most determined ones manage that (in 2020 about 10% of participants).

And that's not the end of surprises - to sum up the challenge, the City of Gdansk has provided even more awards for the most active participants: vouchers for restaurants and bicycle stores, additional awards for TOP 5 women and men, a mobile bicycle service for schools, a "Cyclist Friendly Employer" certificate for the best companies in a given category and diplomas for the remaining categories. All together over 1300 awarded!

Sweatshirt and socks with the campaign’s logo as prizes for active participants of the challenge, funded by the City of Gdansk

The Gdansk Cycling Challenge is a multi-track campaign, fulfilling several different goals at the same time:

● shows the inhabitants that bicycle transport can be more pleasant and often faster than cars, and the season does not end with the arrival of autumn, on the contrary!

● engages hundreds of smaller and larger institutions in Gdansk to have fun together: companies (from one-man businesses to branches of multinational corporations with over 1000 employees in Gdansk alone), secondary schools, universities and organizations;

● creates a positive, committed and very diverse community, which can be joined by anyone with a phone and even the simplest of bikes, scooters, skateboards and rollerblades. Young and old, men and women, sport fans and people who had a long break from any activity at all - no one feels excluded here and everyone can become part of the challenge;

● promotes local suppliers among participants of the challenge by offering them vouchers to bicycle stores and restaurants as prizes.

The contest has become a permanent part of the city's autumn tradition and citizens already know that autumn is actually a re-opening of a bicycle season.