Everybody get on your bikes now!

The question for 250 thousand dollars - straight from the Millionaires - who wrote the lyrics of the song “Just can’t get enough"? Whether you know the answer or not (and it was Vince Clarke), you certainly have the melody in your head. So do we - but unlike Depeche Mode, we can’t get enough of bicycles. In Activy we believe that bicycles can be addictive and that anyone can jump on a bike and cycle regularly.

Do you know that there are already two billion bicycles in the world? So much so that the largest car park in the world would only be able to fit 0.1% of them. And there will be even more because the two-wheeled madness is just getting started! Why? We believe that the number of cyclists is growing in direct proportion to the increase in public awareness of healthy lifestyles and ecology. And this is a trend that we enjoy. First of all, because our cycling fan club is being joined by other enthusiasts of two wheels. Secondly, because it means that we understand better and better the dependence of our well-being on the state of the surrounding environment and regular physical activity. 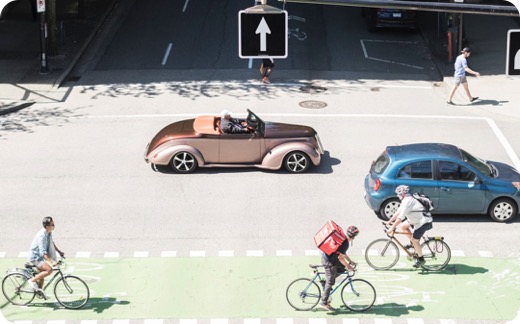 Activity = health = must have

This is a good time to explain an important thing - the meaning of the physical activity. To quote the popular health portal: "physical activity is every activity, every movement made by the skeletal muscles of the body, which is characterized by more than resting energy expenditure. It is a component of the overall energy expenditure, necessary not only for the loss of excess mass, but also for the overall functioning. If you thought that as a non-athletes you are exempt from physical activity, we are happy to inform you that you are not. Attention (there will be a capslock, so that you won’t miss it): EVERY ORGANISM needs MOVEMENT. Extreme feats can be left to their enthusiasts, but maintaining a good condition of the body is a task for each of us. According to WHO, 2.5 hours a week is enough to keep fit. This can easily be done. Therefore, from now on when your friend invites you to run together, let the lack of professional leggings or records in Endomondo be no reason to refuse.

How bicycle overtook the car

Cycling is a very similar case. It has an additional benefit, which is basically at the same time its main component: the bicycle. The history of this invention began more than two hundred years ago, although its prototype was more like a running machine. It had no pedals and the use of it was not the easiest. Maybe that's why it took a whole century to draw its first fans. During this time, the vehicle was improved with further innovations: heavy metal wheels were replaced by rubber tires, pedals were added to support their movement. The bicycle became a mean of transport, which the French quickly noticed. After successive transformations in the form of a gear, spokes, a chain and an easy-to-use steering wheel, the whole world became fascinated by them. This is how we entered the golden age of bicycles. It turned out to be an ideal vehicle for fast movement between city districts, accessible to all. In this way, the two wheels played an important role in the emancipation of women, among other things. Not only did they allow them to reach the most needed places, which was the domain of men until then. They also woke up to new fashion needs: stiff corsets and heavy dresses definitely limited movement when driving. This is how the first women's clothes appeared, whose main goal was comfort and practicality of use. The car revolution stopped the bicycle industry from flourishing for several decades, awakening the feeling that in the era of rapidly developing automotive industry, two wheels are the equipment for those who can not afford four. Fortunately, the two-wheelers won again: it started in Asia. Katie Melua's song about nine million bikes in Beijing is not just a pleasant blues classic. In the second half of the 20th century China was a true metropolis for two-wheelers. Nowadays, these vehicles are everywhere - there are twice as many of them in the world as there are cars.

Bike doesn't ask you how well you can ride it

This shortened history of bicycle (r)evolution has led us here - we can safely say that the beginning of the 21st century is a renaissance of the golden age of bicycles. More than 70% of Poles are cyclists, for whom bikes are mainly equipment used for recreation or communication, but also - physical activity and professional sport. With this result, we gain the lead over Finland, Norway or Sweden, in which bikes are used by about 60% of the population. Germany (76%), Denmark (80%) and, of course, the Netherlands (99%) are in the top 3 of the cycling ranking. In every country a bicycle is primarily a means of public transport, which immediately dispels all doubts: anyone can ride it. The message is simple- don’t hesitate and get on your bike!

Do you want to make your employees happy?